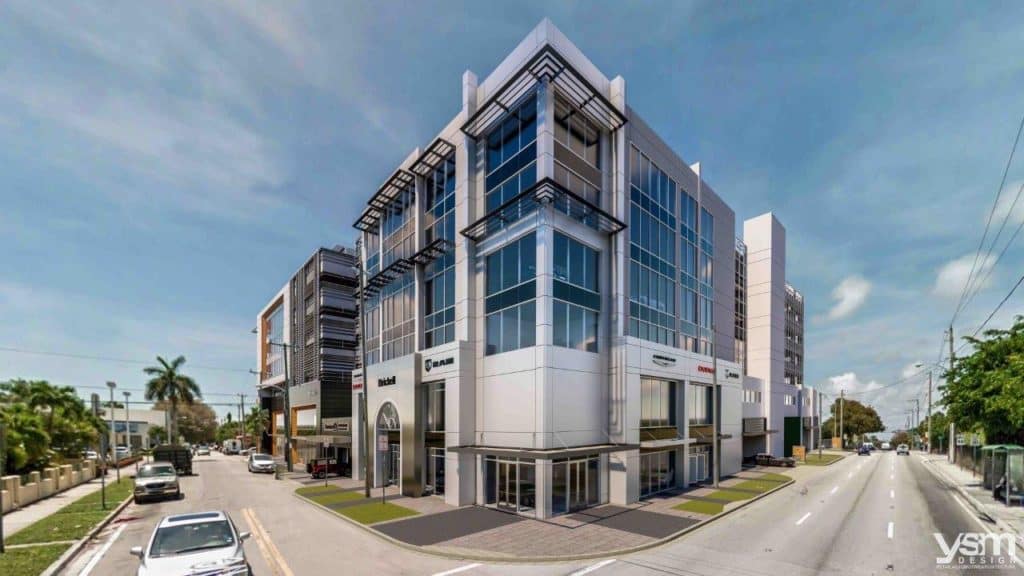 From humble beginnings in Miami, Murgado Automotive Group has transformed in recent years from a neighborhood seller of new and used vehicles to a regional powerhouse, representing the finest automobile brands in the world. Each day, Murgado Automotive Group customers drive away from our dealerships in Miami, Stuart and Chicago in the safest, most dependable and luxurious new vehicles available from manufacturers including Audi, Buick, Cadillac, GMC, Honda, Infiniti, Mazda and Volkswagen. And just down the street from our headquarters, clients can visit Brickell Luxury Motors and stargaze at high-performance previously owned cars. Future locations include a Chrysler, Dodge, Ram, and Jeep dealership in Miami, a Bentley store in Jacksonville and Maserati and Alfa Romeo dealerships in both Stuart and Jacksonville.

In 2001, Mario Murgado, the former senior managing partner with the Braman organization, purchased an almost barren Brickell Honda and Brickell Pontiac GMC dealership in Miami’s Little Havana neighborhood and turned it into a successful and profitable venture.

A lifelong car lover, Murgado left a stable and well-compensated position with one of the country’s most well-known car dealers and decided to bet his future on himself. Like many entrepreneurs, he pulled together all of his assets and chose to invest in his own dream – coincidentally purchasing a dealership located just a few blocks from the home where he lived when he first came to the United States.

After substantial investments in the facility and the implementation of various strategies, Brickell Honda now sells more than 3,600 Hondas each year and Brickell Buick & GMC has been one of the top dealers in the area for more than 15 years – including being named Dealer of the Year in 2015, 2016, 2017, and 2018.

In 2011, the company opened Brickell Luxury Motors, offering high-performance previously owned cars from Bentley, Ferrari, Maserati and Porsche among others. In 2013 Murgado Automotive Group added Audi and Infiniti dealerships in Stuart. Both are flagship stores which have exceeded both company and manufacturer expectations.  In addition, Audi Stuart, in its first year in operation, earned Audi’s Elite Magna Society Award, the highest honor bestowed upon Audi dealerships. It was the first time ever that a new dealership reached that status in its first full year of operations.

In 2014, Murgado Automotive Group added its Mazda franchise, and acquired Ocean Cadillac, a well-regarded family owned dealership, and in 2017 acquired Honda and Volkswagen dealerships in Chicago.

Murgado Automotive Group has steadily grown its sales and business footprint, developing a corporate culture which focuses intently on meeting and exceeding customer expectations.  Executives receive an uncommon depth of training in all facets of the business with the long-term goal of enhancing the management team and position for future growth.

New facilities, new employees and new markets have all been integrated into the Murgado Automotive Group system, and the company’s culture has led to top numbers in sales and service across all brands.

Marking bona fide proof that the company is poised to manage further growth: In a 12-month period, Murgado Automotive Group stores won top dealer awards at the home base in Miami for Buick while also reaching elite status in Stuart for Audi. The business success of Murgado Automotive Group may only be matched by the organization’s commitment to the communities where it does business.

When the company gets involved with a cause, they go big. 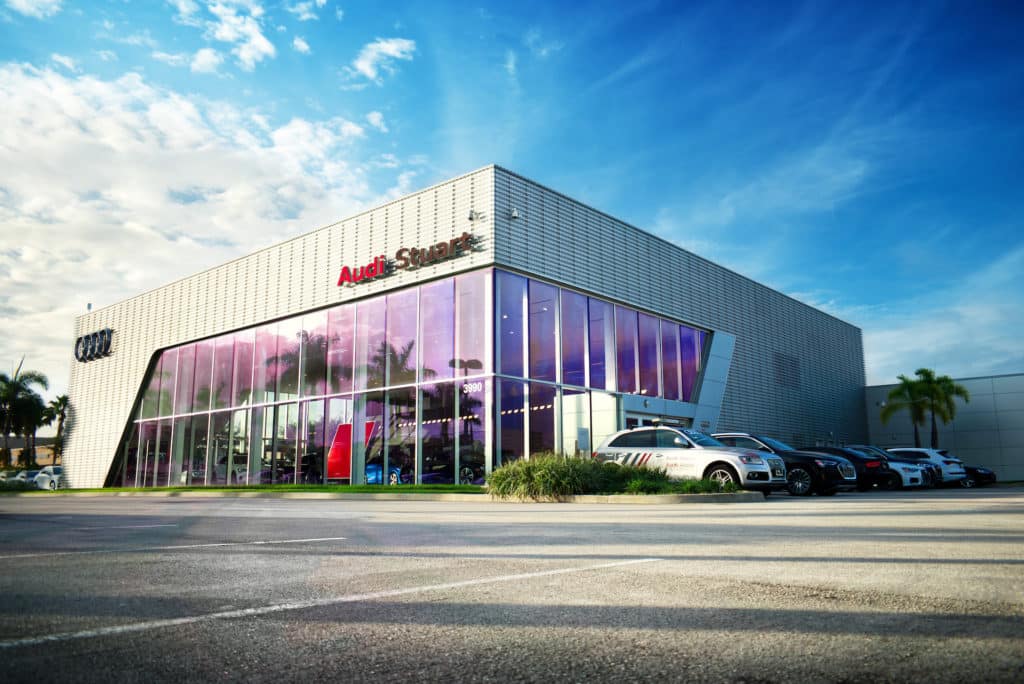 A culture of family, and giving back, is imparted on all employees throughout the company.

Partners Mario Murgado, Alex Andreus, and Rick Barraza are recognized names in the automotive industry and are auto enthusiasts with a passion for excellence. That is why you can always find them at the dealership, ensuring that your experience in buying a car is always an exciting and pleasurable one. We also have a professional sales staff, educated and respectful to assist you in any of your automotive needs.

Come see us and become a part of the Murgado Automotive Group Family. We are confident you will enjoy your experience with us! 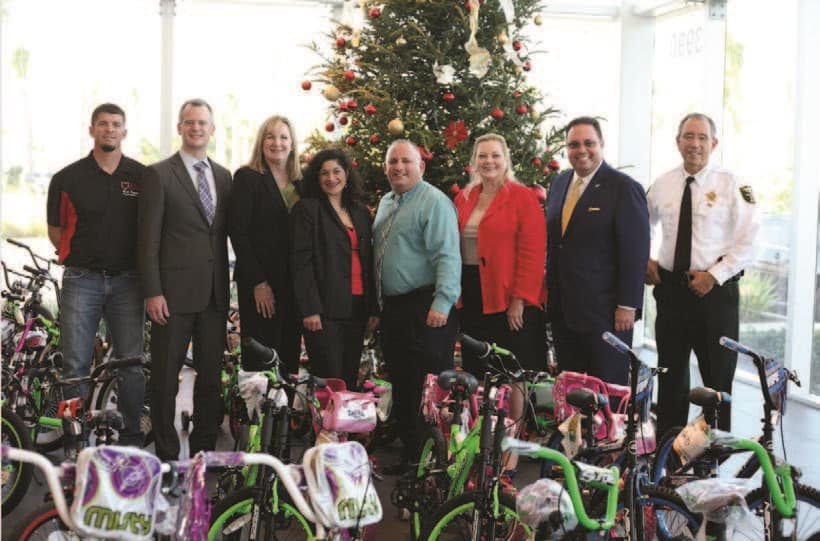 The company’s first three employees were Murgado and his business partners Alex Andreus and Rick Barraza. The trio knew the market from working at another dealership group and quickly increased sales and built an entire new team. Today Murgado Automotive Group employs more than 200 people on its 8th Street campus and has been highly awarded and praised by automotive manufacturers and leading automobile industry publications, alike.

When it came to the Murgado Automotive Group facility, Murgado saw problems both inside and out.

“Everything was poorly lit at night, it was dirty and the back lots had a ton of barbed wire,” said Murgado. “From the street, it was not an inviting place and we had to change it.”

The inside wasn’t much better. Imagine broken ceiling titles, stains on the floors and walls, and old and torn-up furniture. Everything needed to be scrubbed clean and hit with fresh paint just to be presentable.

Murgado and his team got to work. The barbed wire came down (against the recommendations of the local police), new furniture arrived, and state-of-the-art equipment was installed. The new Murgado Automotive Group facilities gleamed.

Part of the Miami tapestry

A Miami resident since arriving from Cuba when he was four years old, Murgado wanted his dealership to be close to the residents and a good corporate citizen. Murgado Automotive Group contributes to dozens of local charities and has raised hundreds of thousands of dollars for organizations like Camillus House and Nicklaus Children’s Hospital. Murgado has served on the Orange Bowl Committee for many years regularly supplies local groups with holiday supplies and toys for kids at Christmas. He even buys hamburgers for the homeless.

“When we got here, we worked closely with the leadership of the city and many local groups,” said Murgado. “We are proud to be in Miami, and we try to help out everyone in the neighborhood when we can.”

While the overall tale is one of an American success story, it wasn’t easy for Murgado and his partners. Shortly after purchasing the dealership, the United States suffered the September 11 attacks, and economic uncertainty crippled the car industry. The manufacturers stepped-in with healthy incentives that kept dealers around the country afloat, but it was a harrowing period. Murgado Automotive Group, already running like a lean start-up, was able to weather the situation.

In 2008, the Great Recession hit the automotive industry particularly hard. The major U.S. manufacturers received bailout funds from the government and, once again, the fate of the industry was murky. Murgado Automotive Group took an aggressive strategy in digital media at that time and was able to keep its market share in Miami while the rest of the industry faced steep declines.

“We worked incredibly hard during the recession,” said Murgado. “We never laid anyone off and truly came together as a team and a family to overcome an incredible obstacle.”

Sadly, the dealership that began as Trail Pontiac stopped selling Pontiac vehicles when GM discontinued the brand in 2010.“It was a tough time because we lost what was once our flagship brand,” said Murgado. “But GM also awarded us a Buick franchise, so that lessened the impact – and then the tsunami hit.”In 2011, a devastating tsunami struck Japan, dealing a major blow to Honda, one of Murgado Automotive Group top sellers. Production temporarily ceased on some models and the supply of parts for new cars built in the United States was disrupted. Murgado Automotive Group had customers who wanted to buy Hondas but not enough cars to meet the demand.“We leaned on our other brands, sourced used cars and made it work for our customers,” remembers Murgado.

Expansion outside the neighborhood

While adding Buick to the 8th Street campus in 2011 and Mazda in 2014, Murgado Automotive Group has also expanded outside the downtown area in recent years, adding Ocean Cadillac on Miami Beach and Audi and Infiniti dealerships in Stuart, Florida. In 2017, the company purchased Honda and Volkswagen stores in Chicago and was awarded a new Bentley dealership in Jacksonville. Future plans also include Alfa Romeo and Maserati dealerships in Stuart and Jacksonville.

For Murgado Automotive Group, the future is bright. Construction on the new Chrysler, Dodge, Ram, and Jeep dealerships will begin in 2019, and by the end of 2020, the company will add another 90 employees to the area. 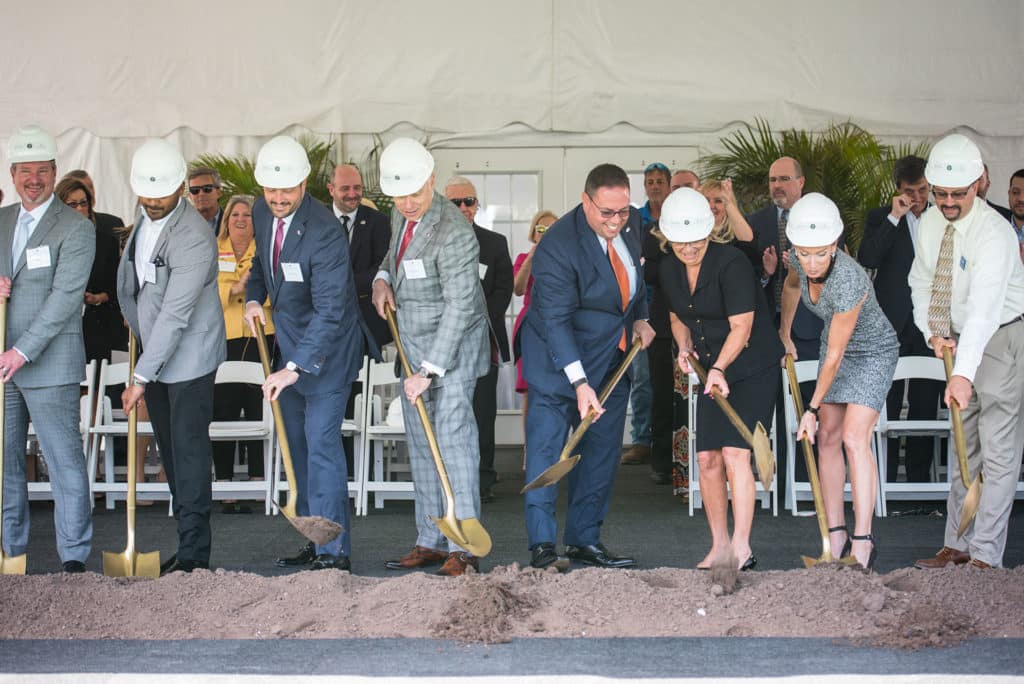 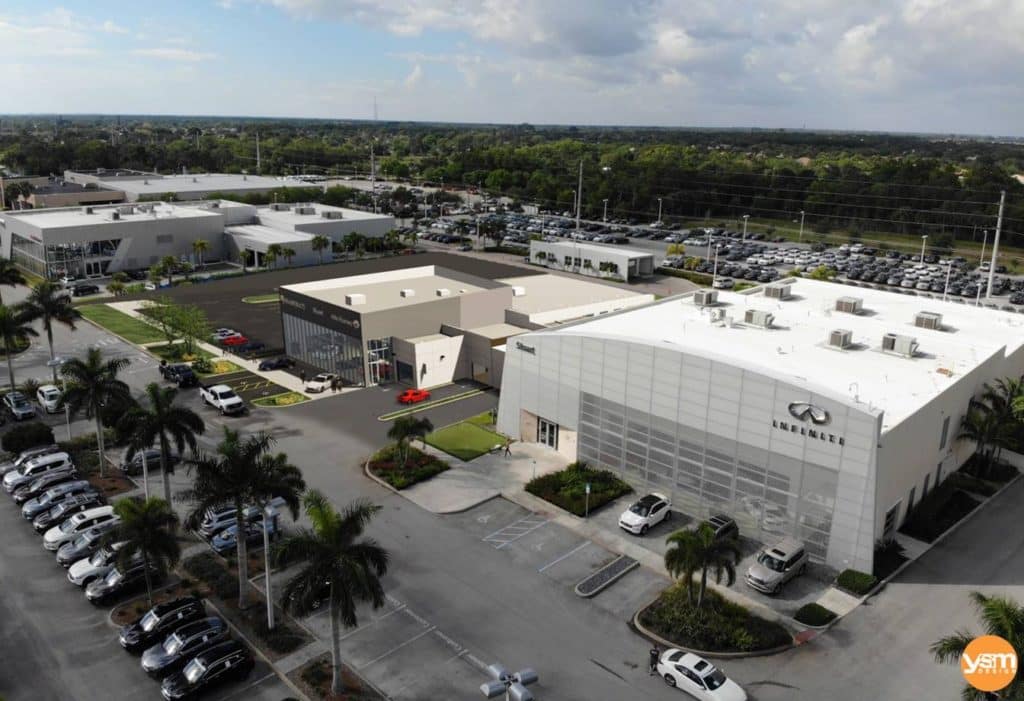 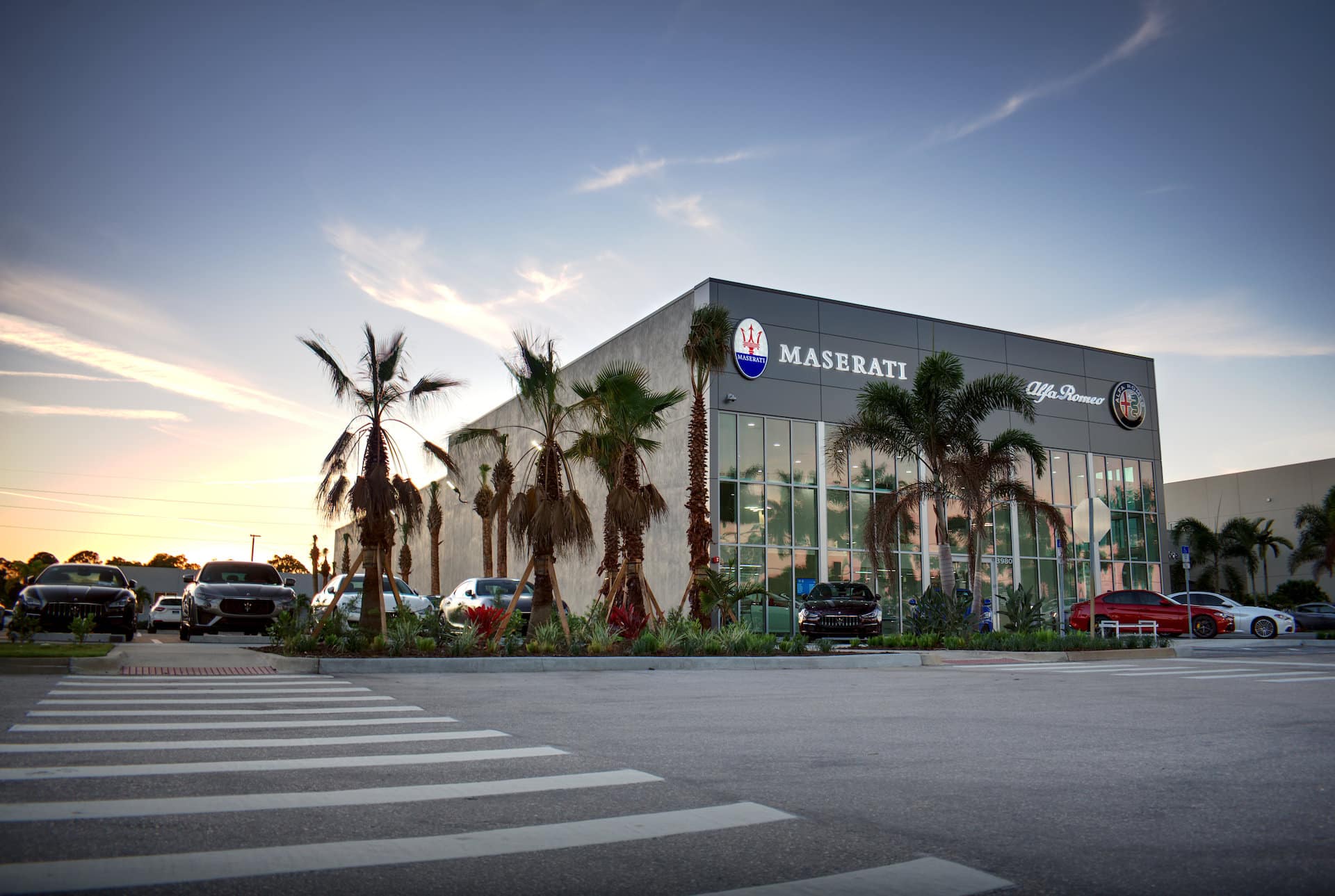 The Honda Dealership That Almost Wasn’t

William Packer, one of the first owners of the dealership now known as Murgado Automotive Group, was a member of the “Greatest Generation” that lived through and won World War II. The U.S. auto industry shut down during the war in order to support the wartime manufacturing efforts. Many dealerships didn’t survive, and the Japanese attack on Pearl Harbor was a source of great pain for most Americans. When Honda began efforts to sell cars in the United States in 1970, Packer had no interest. Even though owning a Honda dealership required very little investment, Packer thought it was his patriotic duty to avoid the brand.

The general manager at the time, Dan Horvath, thought otherwise. He recognized that there could be a market for the fuel-efficient cars and convinced Packer to give him a little space on the lot for Hondas. Horvath was given one parking space to display one car near the front of the parts department, and the rest of the Hondas were relegated to the back lots.

When the 1973 oil crisis hit, the gas-sipping Hondas started to sell. Still not a fan of the brand, Packer purchased the lot across the street from the flagship Pontiac showroom, placed a small trailer on it for the sales staff, and tolerated the sale of Hondas on 8th Street in the coming years.

Today, Brickell Honda sells more than 3,600 Hondas per year – from a dealership that almost wasn’t.

The Owners are always in! Mario Murgado, Alex Andreus, and Rick Barraza have recognized names in the automotive industry and are auto enthusiasts with a passion for excellence. That is why you can always find them at the dealership, ensuring that your experience in buying a car is always an exciting and pleasurable one. We also have a professional sales staff, educated and respectful to assist you in any of your automotive needs.

Come see us; be a part of the Murgado Automotive Group Family. We are confident you will enjoy your experience with us!